You are here: Home / Archives for sake grades

One of the best things about visiting Japan is a chance to try many different kinds of sake with your friends. You’ll find the sake to be very fresh, vibrant and the perfect companion to whatever you maybe eating. In Japan, sake is referred to as ninhonshu as the word sake is a general term for alcohol. So if you’d like to order sake with your meal, it’s easier to just ask for nihonshu.

Understanding sake can bit a bit confusing at first glance, but with a little knowledge you’ll find yourself understanding the different grades and gaining richer appreciation of the suitableness and complexity sake.

Sake is an alcoholic beverage brewed from rice. The term brewed is notable since it is beverage, similar to beer, that is made from a fermentable grain, rice in this case, water and yeast. The modern sake that you enjoy at your favorite restaurants has been in production for about 1000 years.

Most available sakes will have an ABV ( alcohol-by-volume ) ranging from 12 to 18%. However, the vast majority are around 15-16%, making sake very similar to a heavier red wine in alcohol content. Unlike wine, the fermentation process allows sake to reach a higher natural ABV of around 20 percent. At this level, the alcohol can be overpowering, making it difficult to notice the complex the flavors and aroma, so it is normally diluted with water to a level of 15-16 percent.

Sake is a wonderful beverage to enjoy with all kinds of food, but it pairs especially well with Japanese food. While the types and grades can be a source of confusion at first, no knowledge is necessary to enjoy sake and explore its flavors. 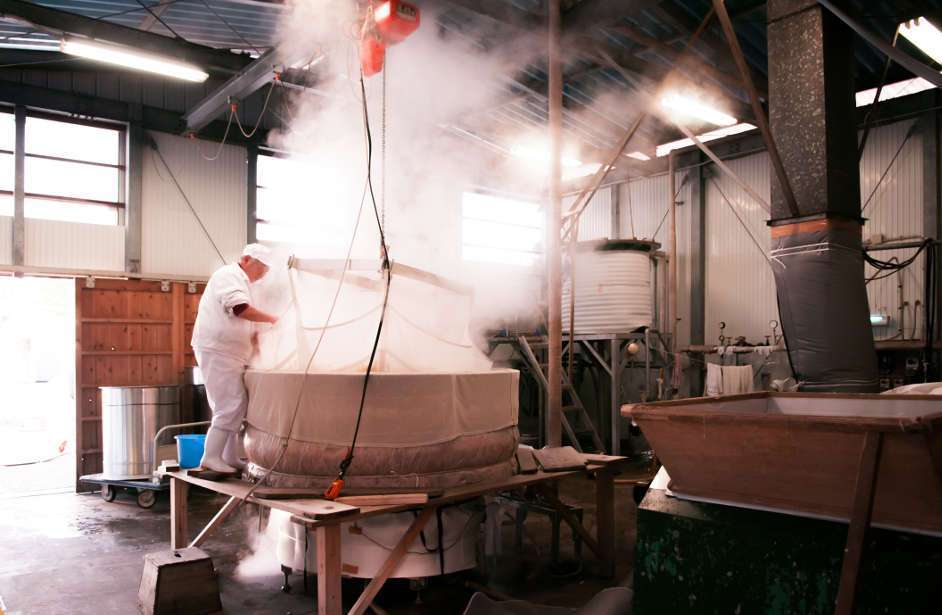 All alcoholic drinks that we humans enjoy have very simple origins. Yeast is added to some type sweet liquid and the process of fermentation will convert the sugars into alcohol and carbon dioxide. The production of sake is similar to beer in that the starches present in the grains are converted to sugars. However, the process of making sake is much longer and involves many more steps than beer.

Because of the simplicity and purity of sake, water is very important.  A pure supply of water with the right amounts of minerals will yield the highest quality sake. Nowadays, brewers have a better understanding of how minerals in the water affect the flavor of sake. Generally speaking, mineral rich waters will produce sake that is full bodied and strongly flavored, while ‘softer’ waters will produce sake that is clean and bright, but with a subtle finish.

Just like the grapes for wine, the type of rice used in sake making will leave its mark. The rice used in sake making has is not the rice you eat, but a special kind of rice that is larger and contains more starches.  It also needs to easily absorb water. Different types of rice do change the flavor of sake but it is not as pronounced as it is in the wine world. Consequently, sake is not categorized or labeled base upon the underlying rice variety.

The yeast used will have a big influence aroma and taste. Up until modern times, sake brewers relied of the natural yeast present in the air for brewing. The Brewing Society of Japan distributes and maintains the collection of yeasts for sake. There are more than 18 different strains of yeast used in sake production, and new yeasts strains are always being developed.

Koji or aspergillus oryzae is the mysterious ingredient used in sake making. It’s presence in the brewing process has a outsized influence on the final flavor and aroma of the sake. A portion of rice is inoculated with spores of aspergillus oryzae in a heated room over a period of time. The result is a sweet, aromatic rice kernel that will be added at various stages of the brewing process. 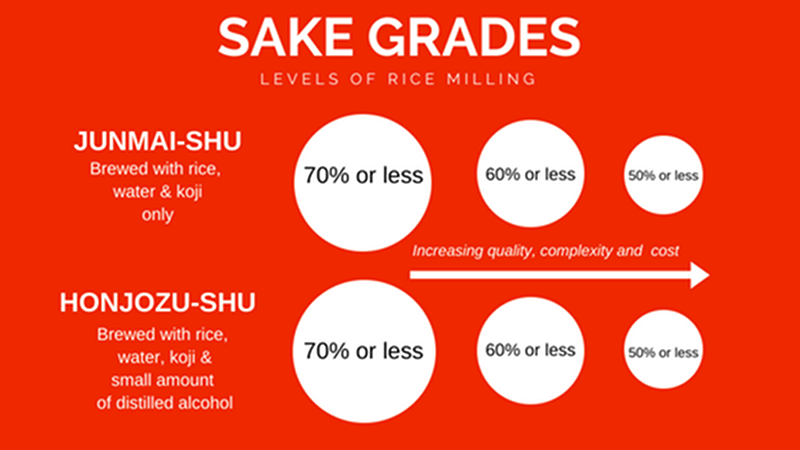 The above graphic describes how sake grades are classified by how much of the outer portion of the rice kernal has been removed. The outer portion of the rice contains fats and proteins that will cause undesirable flavors in the final product. So the outer layer of the rice is milled away before brewing. Generally, speaking the more rice that is milled away will result in a more expensive, more complex sake. However, each category of sake has its own unique style and varying levels of quality within those styles.

Junmai vs Non Junmai
Junmai sakes is pure rice, water, yeast and koji and Non-Jumai sake has an addition of brewer’s alcohol, usually during pressing. This addition is sometimes used to extract volatile flavor compounds from the rice and improve the taste.  However, the addition of alcohol is also used to cheapen the cost of mass produced sake.

Tokubetsu
Tokubetsu means special and it is added to the label of to indicate the extra effort and cost require to brew the sake. An example of tokubetsu might be milling the rice to ginjo levels but keeping within the style of a junmai. Even though the sake could legally be graded as a ginjo, the brewer will label the sake a Tokubetsu Junmai.

Kimoto or Yamahai
Yamahai and Kimoto are older traditional methods for raising the ph level  in the starter batch by the cultivation of lactic acid. The result is a more refined fermentation process. The two methods are similar but the Kimoto method requires more tedious mixing with poles. These processes will take longer to make the sake but result in a richer flavor with more umami.

Nigori
Nigori sake is unfiltered sake that contains some of the rice present from the brewing process and is creamy and cloudy. Nigori’s are fuller bodied, sweeter and make a fine starter or dessert sake.

We usually don’t see high end nigrori’s, because the presence of the rice tends to over power the subtler flavor profiles found in premium sake.